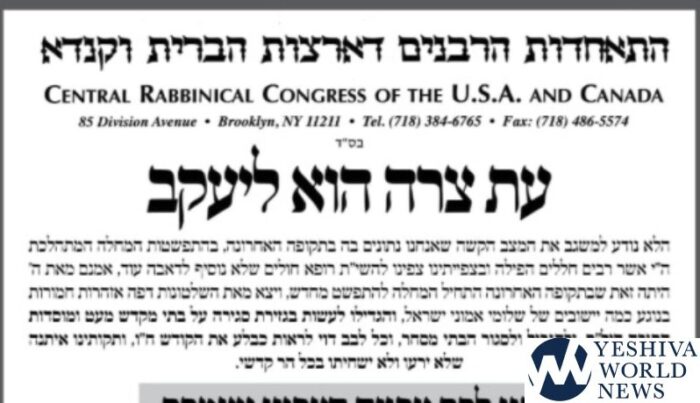 The Hisachudus HaRabbanim (CRC), originally founded by the Satmar Rov (Divrei Yoel) ZATZAL, published a pubic announcement on Thursday condemning the recent protests in Boro Park in the strongest terms and calling to adhere to all health regulations, including the wearing of masks.

“The difficult situation we’re facing recently is well-known, with the coronavirus spreading and many succumbing to it,” the Rabbanim stated. “We hope to Hashem Yisbarach, the Healer of the sick, that we won’t suffer further tzaar but it is from Hashem that recently the virus has begun to spread anew. The government published strict warnings regarding several frum neighborhoods and ordered the closing of shuls and Torah institutions and the restriction or closure of businesses. We’re all dismayed to see the Kodesh being swallowed, chas v’chalilah, and our hope is firm that everything that is Kodesh will be preserved.”

“However, we were appalled to hear that on Chol Hamoed Sukkos, some frum people took action and organized large protests in the streets of the city against the authorities, with unruliness and terrible riots in the presence of the police. To our dismay, they sparked a trend throughout the world of condemning Jews as worse than non-Jews, rachmana litzlan.”

“The small nation of Yisrael is in captivity and exile among the nations and Chazal said (Midrash Rabbah, Devarim 1:19) ‘מהו פנו לכם צפונה? What does it mean – “turn to the north?”  Rav Chiya said: ‘If you see that [the Goyim] want to provoke you, don’t confront them directly but hide yourselves from them until it passes.’” [The word צפון means both north and hidden.]

“Therefore, this is the way the Gedolei HaDor throughout the generations have acted in all the years of our Galus. When Am Yisrael is in Galus under the authority of a nation, [the Rabbanim] always sought the welfare of the city officials, with humility and meekness, until Hashem had mercy and saw the plight of His nation.”

“And therefore we have come to clarify and declare that we have no part whatsoever in all these reckless acts – to rebel against the authorities of our lands in a haughty and arrogant manner. It is clear that this is not the way of the Torah and the Mesorah that we received from generation to generation. Whatever will be, will be, even if [the authorities] don’t consider us and act improperly toward us.”

The letter concluded by emphasizing the need to beseech Hashem and say Tehillim to end the pandemic and stating that all frum Jews have the responsibility to adhere to all health regulations, such as the wearing of masks, etc. And even more, anyone who suspects they may have the virus or has any symptoms of the virus has the responsibility to avoid contact with other people.