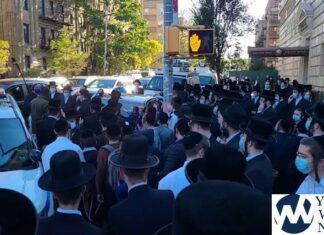 Two stories have unfolded in recent days. The first is that of politicians and the press repeatedly identifying COVID-19 red zones in New York State as Orthodox Jewish Neighborhoods; such hatemongering would, justly, be deemed intolerable and thus never happen vis-a-vis any other religious, ethnic or racial groups. The second is that of a massive chilul Hashem (desecration of God’s name) in response. [In truth, elements of chilul Hashem also antedate the actions of the politicians and press.]

We are, b’siyatta d’Shmaya, going to exclusively focus on the second story. [The first should be appropriately responded to, separately.] The reason being that a chilul Hashem is just that, regardless of provocation; provocation, undeniable as it is, does not diminish or mitigate chilul Hashem.

There is no suspense. In relating to chilul Hashem, there is one – and only one – vital, mandatory, conclusion: condemnation.

What needs to be emphasized at the outset and continuously experienced and re-enforced throughout is that the condemnation is self-condemnation. Kol Yisroel Areivim zeh bo’zeh. The Jewish people are one; and, as such, all are mutually responsible and interdependent (Shavuos 39a). There is no “us” and “them”, only one organic, encompassing “we”.

[It is self-understood that this interdependence is an internal reality and perspective; the external world has not been granted license to assign collective blame.]

One final introductory note: please do not draw inferences from what is not said. The following remarks, due to three factors, are very incomplete.

1)Lack of time – response to chilul Hashem must be swift, thus not allowing the requisite time for comprehensiveness

2)Lack of yishuv ha’da’as (composure) – the ongoing chilul Hashem has, for so many of us, been so personally, deeply, disturbing and profoundly painful that it has been difficult to muster the concentration and focus needed to respond clearly and comprehensively

3)Lack of ability – my own limitations and inadequacies

Let us b’siyatta d’Shmaya initially, schematically list some of the incidents and instances of chilul Hashem and subsequently try to penetrate to the core and crux of this sacrilege. Throughout words are inadequate to depict and denounce the various manifestations of chilul Hashem.

These are some of the incidents and instances of chilul Hashem; each one was entirely, egregiously gratuitous, in no way warranted by the journalistic and political provocation. Following is an attempt b’siyatta d’Shmaya to reflect, albeit partially, on their core and crux.

We begin with a story. A ben Torah from a thriving Jewish community met my grandfather zt”l. After an exchange of greetings, my grandfather inquired as to where the individual lived. Upon hearing the answer, he responded, “a very fine community. There is only one problem: they forget they are in glaus (exile).”

How extraordinary! Yaakov Avinu knew that his earthly life would end in Mitzrayim. Hakadosh Baruch Hu had promised him that He would return his body to Eretz Yisroel for burial. See Breishis 46:4, with Rashi ad. loc. quoting Chazal. And yet, he viewed himself as a stranger in Mitzrayim, his stay as temporary.

Galus Mitzrayim (the Egyptian exile) serves as a paradigm for all subsequent galuyos (exiles.) Irrespective of the duration of his stay, a Jew in chutz la’aretz (outside the Land of Israel) is never at home. The land is not his; the streets are not his.

Yaakov Avinu‘s request to be buried in Eretz Yisroel forged a natural bond between his descendants and the land, whereby they would yearn for the land of their ancestors and view themselves as strangers. This is the import of Chazal‘s comment, “He sojourned there – this teaches that Yaakov Avinu did not intend to settle in Egypt, rather to live as an outlier” i.e., this teaches us how Jews ought to comport themselves in each and every exile. They should know that they are not supposed to settle, rather to sojourn, and they should view themselves as non-citizens. (Meshech Chochmo, Vayikra, 26:44)

[Once again, note that this perspective is exclusively internal; the nations of the world have not been granted license to disenfranchise us.]

The brazenness and arrogance of the protests have been appalling. The defiance and claims of proprietorship – “no one is going to stop us; let them try!”; “this is our neighborhood” – are the antithesis of the foundation of Jewish existence and continuity in the diaspora. How lamentably and deplorably ironic that such sacrilegious, antithetical behavior was allegedly intended to preserve our singular Jewish religious identity and way of life. (See below section VIII.)

[To be clear, the behavior and tone of the protests would have been intolerable in Eretz Yisroel as well. We are reacting to the protests in the diaspora context in which they happened.]

To be sure, this modus vivendi in exile does not mean we should accept being trampled upon; the Torah allows for effective, responsible, respectful protest.

The Roman Empire issued an edict forbidding Torah study, circumcision, and Sabbath observance. What did Yehuda son of Shamo’a and his colleagues do? They sought council from a well-connected [aristocratic] woman. She advised them, “come and demonstrate at night.” They went, demonstrated at night and said, “for the sake of heaven, are we not brothers? the sons of a single father and mother? in what way do we differ from all other nations that you issue harsh decrees against us? And the authorities rescinded the decrees (Rosh Hashana 19a)

What a profound contrast between the restrained, respectful mode of protest adopted by Chazal, and the gratuitously brazen, confrontational mode displayed these past two nights. Bayshanus (humble refinement, healthy inhibition) is a defining Jewish characteristic (see Yevamos 79a.) Chazal protested Jewishly. The azus ponim (brazenness and arrogance) which characterized the protests betrayed the very essence of Jewishness.

Let us attempt b’siyatta d’Shmaya to probe another core aspect of the chilul Hashem.

The content of the mandate to be holy as explicated by Chazal is this: the Torah prohibits incestuous and adulterous relationships, as well as non-kosher foods. The Torah, however, permits marital relations and consumption of meat and wine. Thus, the individual with hedonistic inclinations would find an opening for orgiastic behavior with his wife (or wives) and gluttonous consumption of meat and wine etc. and he would have been a naval with license from the Torah. The mandate “Be holy” precludes this. After detailing specific prohibitions, the Torah commands in general, sweeping terms that we abstain from all forms of excess… (Ramban, Vayikra 19:2)

At first glance, the mitzvah “Be holy”, according to Ramban, closes what would otherwise be gaping holes in the Torah. Upon reflection, however, Ramban’s teaching runs much deeper. A crucial clue for deeper understanding is provided by Ramban’s famous phrase, “he would have been (i.e., absent the mitzvah ‘Be holy’) a naval with license from the Torah.” What does the word naval denote?

The author of Hakesav VeHakabala (in his commentary to Devarim 32:6) explains the semantics of naval.

A dead animal is dubbed a neveila due to the loss of its vital essence…just as the term neveila refers to loss of vital physical essence, it also refers to loss (or destruction) of essential spiritual essence – i.e., acting in a way that destroys human spiritual splendor

Thus, in Psalms, an atheist is described as a naval. “אמר נבל בלבו אין אלהים” the naval, in his heart, denies the existence of God (14:1, 53:2.) The atheist’s external appearance is human, but in denying Hakadosh Baruch Hu he has forfeited his humanity. It is fittingly emblematic of one whose external appearance belies his inner vacuity that he outwardly professes faith, while inwardly rejecting it.

Mitzvos haTorah are vibrantly bi-dimensional, consisting of body and soul. Both components are Divinely mandated and inseparable. The prescribed or proscribed action or speech constitutes the body; the religious-moral-spiritual value and telos comprise the soul. Thus, by way of illustration, proscribed incestuous and adulterous relationships form the body. Chaste, redeemed, sanctified physicality comprises the soul. So too for prohibited foods.

An individual who “observes” these mitzvos but behaves orgiastically with his wife and/or eats and drinks gluttonously is a naval. Outwardly he appears observant, but actually is decadent. A beguiling externality of observance masks a reality of non-observance. In his hands, Torah becomes soulless – a dry, legalistic compendium of technical, superficial, unidimensional rules and regulations. The naval‘s infractions are not discrete or self-contained; instead they vitiate and violate all of Torah. He lives not Torah, but a cruel caricature of Torah.

Avodas Hashem (service of God), in general, is rooted in shiflus (submissiveness to, and before, God). The mitzvos of tefillah (prayer) and simcha (rejoicing), in particular, are beautiful, soulful expressions of such shiflus.

It is a mitzvah (on Sukkos in the Beis Hamikdash) to rejoice in a maximal fashion … the joy that a person experiences and expresses in performing mitzvos, reflecting his love for God who commanded them is a great form of service … and one who lowers himself, oblivious to prestige on these occasions is a great, dignified person who serves Hashem out of love. David, King of Israel, exemplified this, saying, “I would go even further in making light of myself, and become genuinely lowly in my own eyes” (Rambam, Hilchos Lulav, 8:14-15)

When we brazenly and arrogantly, even violently, protest, ostensibly as to be allowed to gather in an unrestricted fashion for prayer and Sukkos celebrations, we act as nevalim, Rachmana litzlan. We distort and contort the beautiful, soulful mitzvos of tefillah and simcha, rooted in shiflus, into dry, legalistic, soulless, superficial, hypocritical performances.

Talmud Torah (Torah study) is a pillar of faith [see Rambam, Hilchos Kerias Shema 1:2] whereby we submit to ratzon Hashem (the will of God), humbly consecrate and elevate our intellects, become enlightened by the luminous words of Torah, and “connect” to Hakadosh Baruch Hu. When we violently, primitively protest, allegedly to keep yeshivos open, we make a mockery of talmud Torah. We act as nevalim.

When we distort and abuse sacred halachos to provide cover for mob violence, we act as nevalim.

What results is a colossal chilul Hashem.

It is prohibited to delay in the slightest in overriding Shabbos for a dangerously ill individual. “‘[These are miztvos] that man will fulfill and thereby live’ – he should not die on their account.” This teaches that mitzvos haTorah do not embody harsh justice in the world. Rather they embody compassion, kindness and perfection in the world (Rambam, Hilchos Shabbos 2:3)

Demonstrating zealous concern for life, even, when warranted, to the point of temporarily overriding mitzvos, reflects and preserves their true, essential character. On the other hand, disregarding health protocols designed to protect life suffocates the soul of miztvos.

We have been, inexplicably and inexcusably, selective in our reactions. Over the past months on multiple occasions we have vociferously protested and challenged the governor’s actions and yet while the hotspots developed we remained deafeningly silent. The silence continues in the face of the brazen, violent chilul Hashem reaction which again saps the soul of miztvos. These glaring inconsistencies also create a naval bereshus haTorah effect. And chilul Hashem ensues.

And, finally, we note the obvious: violating and/or subverting the dina demalchusa (halachically recognized law of the land) only compounds the chilul Hashem. So too the silence in the face of such subversion and violation.

May we merit a piska tova (favorable “verdict card”), a year of kiddush Hashem, yeshuos (salvation), and nechamos (consolation).