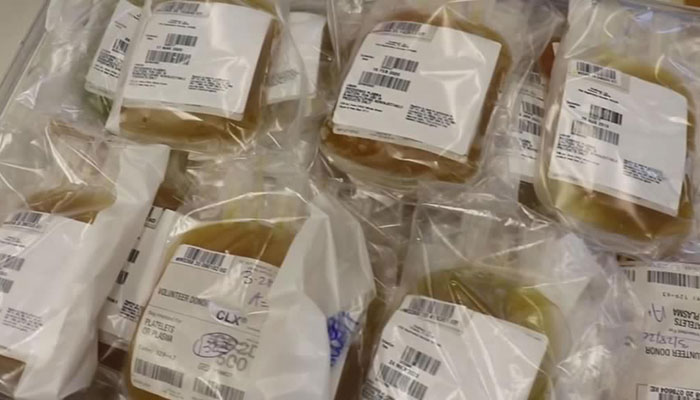 More than 3000 Jews have already donated blood plasma at blood banks around the New York area, with another 6,000 tested on Wednesday to see whether they have the correct antibodies.

Orthodox Jews from New York communities hit hard by coronavirus are turning their curse into a blessing, by donating the antibodies present in their blood plasma to help cure other Americans of the disease.

More than 3,000 Jews have already donated blood plasma at blood banks around the New York area, with another 6,000 tested on Wednesday to see whether they have the correct antibodies.

Chaim Lebovits, a shoe wholesaler from Monsey, New York, who has been masterminding the operation, says he hopes that in total around 45,000 Orthodox Jews from the New York area will take part in the plasma drive in total, according to the Forward.

“The plasma isn’t just used for frum people or Jewish people, it’s for people in general,” Lebovits said. “We as observant Jews have an obligation to preserve life, and save life, and help as many people as we can.”

Lebovits became involved in organizing the drive when he was contacted by Dr. Shmuel Shoham, an expert on infectious diseases in transplant patients at Johns Hopkins University. In March, Shoham realized that convalescent plasma – antibodies retrieved from the blood of people who had COVID-19 and recovered – could be the key to combating the disease.

Lebovits has no formal medical training, but for years has been helping connect friends and fellow hassidic Jews with medical professionals, including Shoham. Consequently, when Shoham realized that he needed access to a large amount of blood plasma, he reached out to Lebovits.

“I had no idea that he would drop everything and completely immerse himself in this,” Shoham said, adding that Lebovits “is giving his community members a chance to do something, now that they have this power in their body to make a difference.”

The first community to get involved with the drive was the Young Israel of New Rochelle synagogue, which was the epicenter of an early outbreak of the coronavirus in New York state. Around 100 families were exposed to the virus after “patient zero,” a Manhatten lawyer named Lawrence Garbuz who lived in New Rochelle, Westchester county, attended a funeral and bar mitzvah at the synagogue before falling ill. By the end of March, more than 7,000 residents of Westchester had tested positive for COVID-19.

One of the most recent to donate were a group of 120 hassidic Jews from Monsey and New Square, who spent a day traveling to Delaware to donate at the nearest center which had capacity to receive them.

Mordy Searl, a lawyer who has also been helping to organize the drive, has been keen to find people to fill open slots for donation. “Every single open spot within a day’s travel, we’re putting a Jew in,” he said, according to Forward.

The plasma donations offer the haredi community an opportunity to turn around the public image of their close-knit community from a negative focus on the disease, to a positive one of being able to provide a therapy for those still suffering.Each donor supplies enough plasma in one session to benefit three patients, and each donor can donate plasma every seven days.

The process is similar to a blood donation, but instead of simply drawing blood, the machine removes the plasma from the donor’s blood but returns the red and white blood cells, platelets, and other blood components to the donor along with a saline solution to replace the plasma removed.

The efforts undertaken by the haredi community have received the blessing of Rabbi Yisroel Reisman and Rabbi Reuven Feinstein, two respected figures of the community, who have encouraged their fellow Jews to donate the plasma, and have even said that they can drive on Shabbat and holidays to do so. Meanwhile, the Orthodox Union and Agudath Israel of America are both sending messages to the community regarding the science behind plasma donations and its use in treating COVID-19.

This article has been made available through The Jerusalem Post  https://www.jpost.com/diaspora/thousands-of-orthodox-jews-donate-blood-plasma-to-help-beat-covid-19-625912